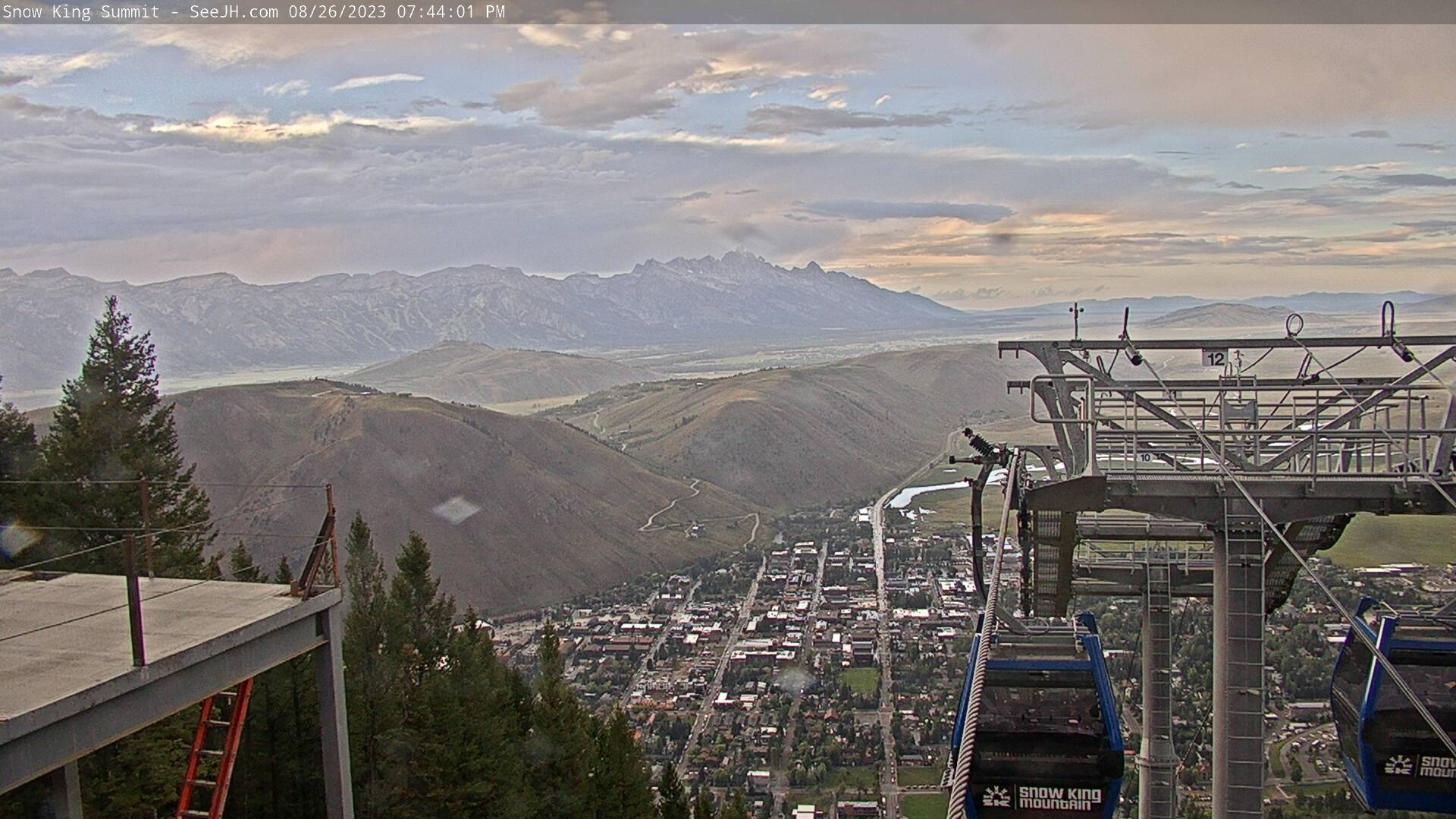 This web camera is located at the top of Snow King Mountain Featuring the Town of Jackson, Wyoming and the Grand Tetons in Grand Teton National Park.

Rich in History
Encompassed by mountains, the flat valley of Jackson Hole is nearly 50 miles long. Meandering through the large valley is the Snake River, which is fed through a variety of streams and rivers. Running north to south, Jackson Hole got its name from David Edward 'Davey' Jackson, who proclaimed the area as a fur trapping ground. In 1828, the area was named after him as fur trappers and explorers flocked to the valley in order to explore its endless sights and opportunities. The western side of the valley is home to the Teton Mountain Range, and several lakes exist at the base of the Tetons. The town of Jackson Hole spans 2.9 square miles and resides at 6,237 feet. Located in the northwest corner of Wyoming, Jackson Hole is only 15 miles from the Idaho border.

Originally inhabited by Native American tribes, the town of Jackson Hole is rich in history. Within the town square, some of the early buildings of Jackson still remain. Teton County was created in 1921 and is made up of almost 97 percent public land. Jackson serves as the Teton County seat with a number of full-time residents, as well as temporary residents and tourists.

Jackson Hole has been in the history books for a number of reasons, not the least of which was due to the United States first all-female city council back in 1920. Additionally it was home to one of the first ski areas in the country and the first in Wyoming. Snow King Resort, otherwise known as the Town Hill, was established in 1930.

While in the early years of the Jackson Hole Valley ranching with its biggest industry, the number of ranches has diminished with only a few remaining. Those ranches that continue to have operations tend to supplement their income as a guest ranch or outfitter/guide for hunting and fishing.

Downtown Jackson Hole
With a small population of 9,577 according to the 2010 Census, the town of Jackson may be small in size but not in personality. Once regarded as a Cowboy Cosmopolitan, Jackson Hole still has country roots and charm that it exudes to residents and visitors alike.

Regarded as an international hotspot, tourism is a large part of what makes up Jackson Hole. With Yellowstone National Park only a few short miles to the north and the Grand Teton National Park lying right in the heart of Jackson Hole; the tourism industry is what makes the town boom as it serves as a gateway to both national parks. Home to three major ski areas and the National Elk Refuge, Jackson Hole is regarded as a world-class destination.

From western shops to galleries, locally-owned boutiques and delicious restaurants, the town of Jackson Hole offers a variety of window shopping opportunities for tourists. The popular town square is adorned by four elk antler entrances. Known for its abundant outdoor activities and as a gateway to the Grand Teton and Yellowstone National Parks, the town of Jackson Hole has much to offer residents and visitors alike.