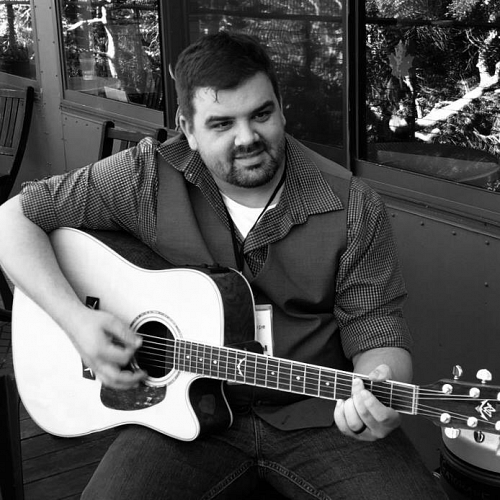 Doug was raised in Kingsville, Texas, home of King Ranch. His father was a Navy officer and his mother was amazing.
Doug began his musical pursuits at a young age, beginning with piano, then saxophone. Following high school, he joined the Army and was stationed in Germany.
While in the Army, Doug met and married his wife, who was also a soldier. In 2003-2004, they both deployed to Baghdad in support of Operation Iraqi Freedom.
After his time in the Army, Doug decided that guitars were easier to haul around than pianos and easier to sing with than saxophones. And it was on the guitar that he finally found his voice.
After settling in Utah in 2014, Doug began seriously pursuing songwriting performance as a solo artist. Shortly thereafter, his song “Faces” was selected for Operation Encore: Monuments, a music project featuring singer-songwriters from across the military/veteran community.
Doug currently resides in Provo, Utah with his wife, their four children, and two dogs (Dodger and Bear).
https://www.seejh.com/wp-content/uploads/logo-white-1.png 0 0 J Vigorito https://www.seejh.com/wp-content/uploads/logo-white-1.png J Vigorito2018-03-17 12:55:212018-11-11 15:11:45Live Music: The Real Doug Lane