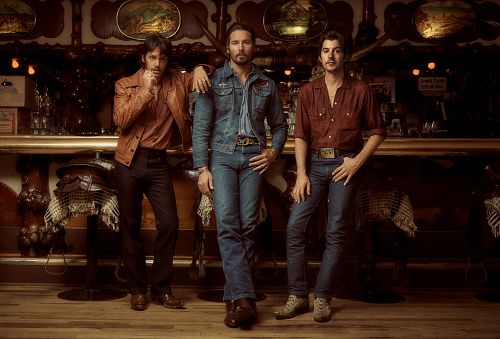 Grammy nominated trio Midland is set to return to Jackson Hole, WY for two headlining shows at The Million Dollar Cowboy Bar on Dec. 30 and Dec. 31. Gaining critical and mainstream appeal with their chart-topping debut album ON THE ROCKS (Big Machine Records), which The Washington Post touted as “the year’s best Country album” their sound has been described by Rolling Stone as “a blend of Laurel Canyon harmonies, sunny Bakersfield twang, road-tested rock and roll, and big pop hooks.”

Midland has dominated 2018 with an ACM win for New Vocal Group of the Year and CMA Awards Nominations for Vocal Group of the Year, Single of the Year & New Artist of the Year. Constantly touring and growing their fan base they have toured with acts such as Tim McGraw and Faith Hill, Little Big Town and are also currently on the road with Thomas Rhett for his LIFE CHANGES TOUR before they finish off the year embarking on their headlining ELECTRIC RODEO tour.

Bassist Cameron Duddy spent many summers and winters with his family in Jackson and has a long history with The Cowboy. The three members who comprise Midland first came together at his wedding in Jackson, and shot the artwork for their PLATINUM-certified debut “Drinkin’ Problem” on the Cowboy’s famous saddle barstools. Now living in Texas, the trio still make it a point to play and visit the venue that has had such an impact on their beginnings and recently named it as one of their favorite honkytonks with Uproxx.com. “Midland and I have been touring the nation playing country music,” Cam said. “And I tell you what, we’ve played from Seattle to Savannah and everywhere in between, and there is NO place like the Cowboy Bar. And I’ve seen my share of barstools.”