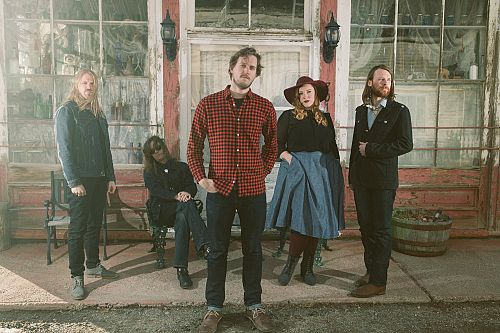 “I moved to Denver on a whim,” says King Cardinal founder Brennan Mackey. “I’d been living in Chicago, working a finance job that I didn’t love, and I knew exactly what the rest of my life would look like if I stayed there. I decided I wanted to throw everything up in the air and see where it landed.”

It makes sense, then, that the cover of King Cardinal’s stellar debut album, ‘Great Lakes,’ depicts a man catapulting himself headlong into the unknown, trading safety and security for adventure and excitement as he leaps over a protective railing. If the record is any indication, Mackey’s own bold leaps have paid off in spades. Pushing raw roots rock into lush, sonically daring territory with hints of cosmic country and delicate folk, ‘Great Lakes’ showcases the five-piece group’s exceptional musicianship and the powerful emotional depth of the vocal interplay between Mackey and fellow singer Texanna Dennie.