Admission: $5 donation to KHOL and $5 for adults to JacksonHoleLive! — kids 17 and under are free

With Shots Fired, Williams has assembled an all-star roster of the nation’s leading funk-rock musicians, including members of Dave Matthews Band, Lenny Kravitz, Slightly Stoopid, Trey Anastasio Band, Lyrics Born, Soulive, Greyboy Allstars, and many others, switching the exact lineup around every time so as to ensure that every Shots Fired show is a one-of-a-kind throw-down that you just can’t get from anything other than music made in the moment, for the moment.

From the moment the band’s first single, “She’s No Good,” dropped into rotation on SiriusXM radio this past spring, Shots Fired has been designated as a 2018 “heat-seaker” and “artist to watch.”  Their instant appeal comes down to Williams’ songwriting, matched live by his incendiary guitar solos and accented by the Shots Fired horns.  Given D.J.’s penchant for topping off raw beats with refined melodies, Shots Fired is best served on the rocks and on the dance floor.

Just don’t let D.J.’s name confuse you, because this guitarist is laying down grooves any “DJ” would love to sample. 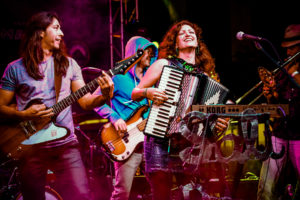 Los Angeles-based collective Salt Petal is invigorating audiences and critics alike with a tropical surf sound in a category all it’s own. With electric guitars, bass, and drums, blending with accordion, synthesizers, and hand percussion topped with multi-lingual lyrics, they hold audiences captive in a new dance state of mind. Soaring melodies and pulsating rhythms create a sound that recalls Blondie, Os Mutantes, Gal Costa, Los Autenticos Decadentes, and 60′s rock and roll.

Please enjoy our food and beverage vendors and kindly leave your dogs, tarps, glass, alcohol and coolers at home.