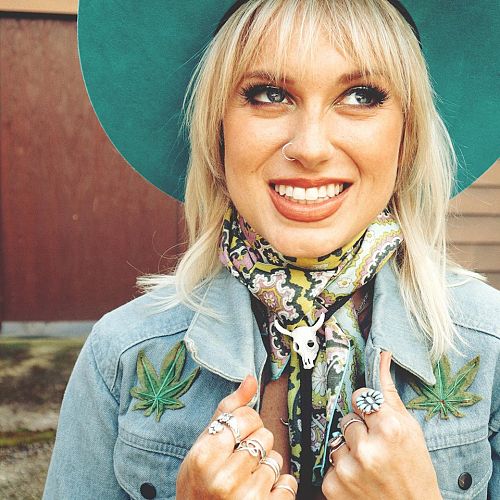 Darci Carlson has never been one to shy away from the camera. From a young age, whether on stage ballet dancing, or singing for her family, Darci was born to entertain. Born July 3rd 1986 to Seattle natives Pati and Mike Carlson, she’s a third generation Rat City Kitty with traveling in her blood. Her dad moved back and forth from Twin Falls Idaho to Seattle as a child, and was a cross country hitchhiker and long-haired rambler for most of his life, which seems to have rubbed off on his firstborn. Darci was also given the gift of music by her father, who encouraged her to pursue the guitar at 12 years old, and filled their home with the sound of Outlaw Country Legends, Southern Rock and Blues throughout her childhood.

As Darci grew older, she pursued music further with private lessons and community college courses. She started multiple bands, mostly all-girl groups, through high school and her twenties. Darci first stepped out into the Seattle music scene with her female fronted Pop Punk band The Dolly Rottens with close friend and co-songwriter Geneva Butler. The group was featured on the Seattle show ‘Band In Seattle’ and self-released their debut album ‘Honeymoon’s Over’ in 2013. The local popularity of the band led to future relationships with videographer Jamie Burton Chamberlain of Black Dahlia Films, who introduced Darci to Billy Gibbons of ZZTop, leading to her role as ‘The Girl’ in the band’s 2012-2015 Gang Of Outlaws live screen content and documentary footage. Darci would go on to work with Chamberlain acting, modeling, and assisting in multiple music videos for local and national acts, such as the Van Eps and Blackberry Smoke.

As The Dolly Rottens drifted apart, Darci Carlson was inspired to focus on her own artist and songwriting development. She began performing with Bassist and friend Dan Infecto and Americana great Billy Cook of the .357 String Band, who encouraged her to pursue a more Roots approach to music. Darci would go on to perform with The Billy Cook Band at the 2014 Americana festival Farmageddon, and on his 2014 record ‘Left To Remember’.

From that experience, Darci went on to record a 2 song demo with her first Country songs ‘Death Bed’ and ‘Release Me’ and performed her first acoustic show opening for outlaw great Shooter Jennings. She soon picked up guitar player Danny Beutler, drummer Heather Thomas, and along with the engineering help of bassist Dan Infecto, released her first EP ‘Release Me’ in the winter of 2014. This line up would go on to tour the majority of 2015 and 2016 together throughout the country, to Sturgis Bike Week, Rocky Point Mexico Bike Week, and Roger Clyne and The Peacemaker’s Circus Mexicus.

She gained respect and notoriety as a no-non sense, high energy performer, songwriter, and frontwoman. Booking her own tours, writing and recording her own music, and making headway in the Outlaw Country music scene in such a short amount of time, she caught the attention of Austin Texas Honky Tonk Hero Dale Watson’s Ameripolitan Music Awards, who showcase artist with prominent roots influence and a DIY approach to country music. She was hailed for her rebellion against today’s Pop Country persuasion and nominated in 2015, 2016, and 2017 in the Outlaw Female of The Year category. Proudly in 2017, Darci Carlson would take home the title, a great feat for a Northwest Country Musician in a sea of Texas, Nashville, and southern bred musicians outnumbering her in the genre.

Soon after her Ameripolitan win, Darci Carlson was sponsored by Monster Energy Drinks and Fender Guitars. She went on to perform at the 2017 SXSW Music Festival in Austin Texas, and around the country as a solo acoustic artist, writing more material, and finding inspiration across the country and south of the border. Darci would go on to develop a strong relationship with Roger Clyne and The Peacemakers, performing frequently as an opening act for the band and building a solid following at Banditos, Peacemakers Headquarters in Rocky Point, Sonora Mexico.

In the Spring of 2017, Darci Carlson joined forces with Seattle Progressive Metal guru Kelly Gray of Queensryche and Operation: Mind Crime to produce and record her sophomore Self Titled record. Seen as an interesting choice outside of the Country Music spectrum, the idea was to work with someone from the NW that would maintain her Rock n Roll edge, and naturally stray from any sort of ‘Nashville’ guidelines or stylings. Gray and Darci worked together throughout the year to produce an album that was non-genre specific, and could be listened to and enjoyed by Country, Rock, Roots and Southern Rock music lovers alike, and as a statement, Darci chose to “self-title” the album. The 9 track record includes singles ‘Wild Reckless and Crazy’ as well as a cover of her all-time favorite Hank Jr. Song ‘Outlaw Woman’ – A nod to her 2017 Outlaw Female of The Year win. The album is set to be released April 20th of 2018.